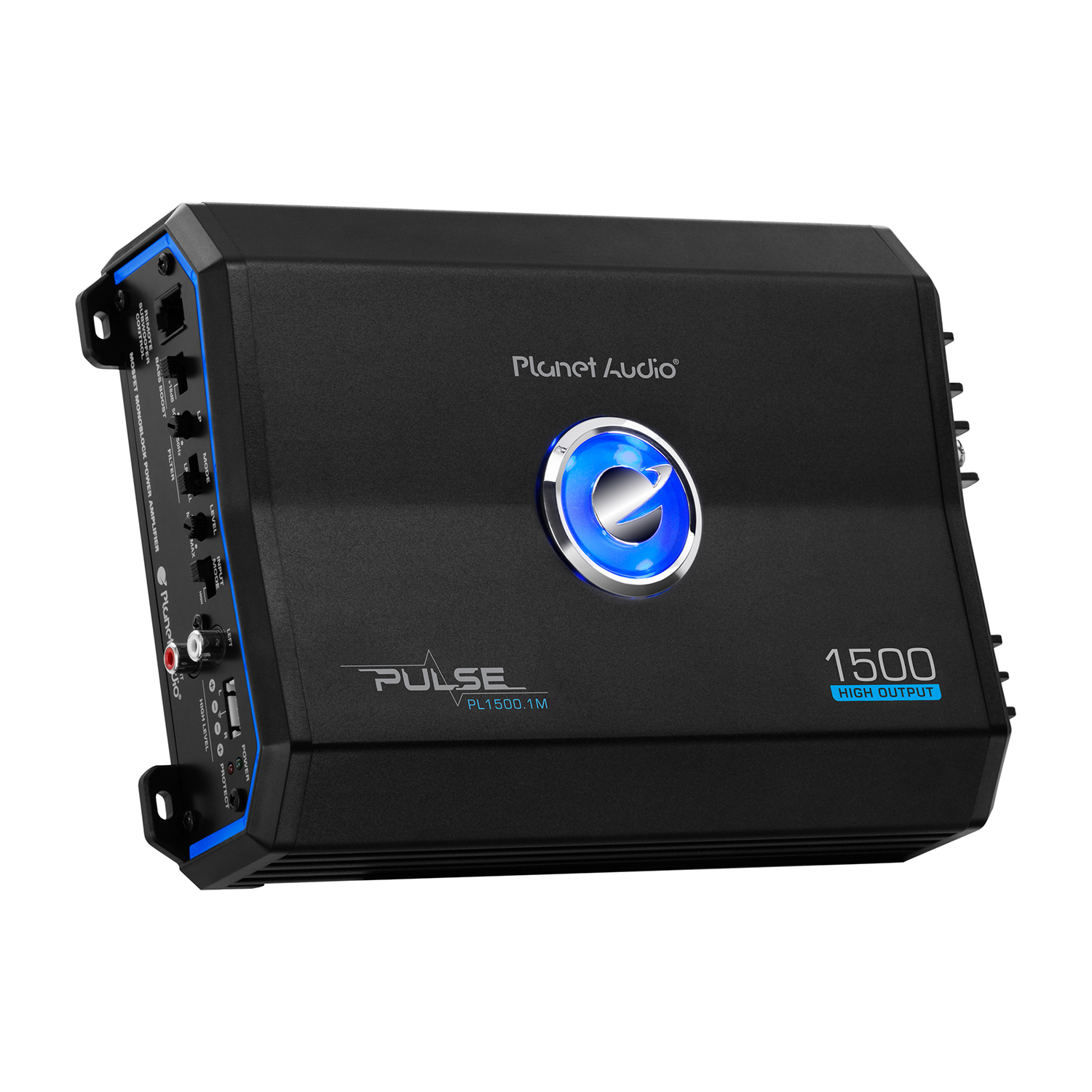 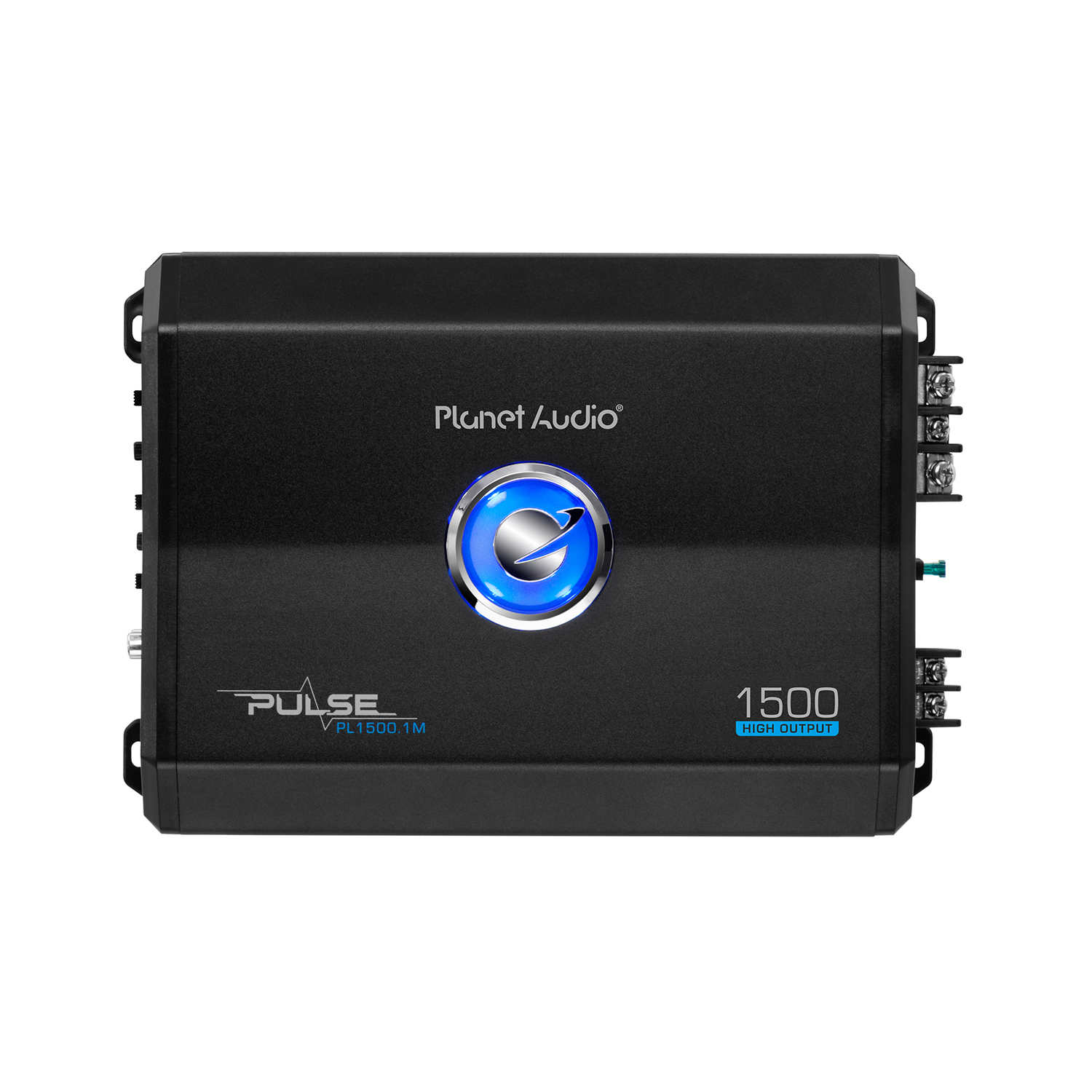 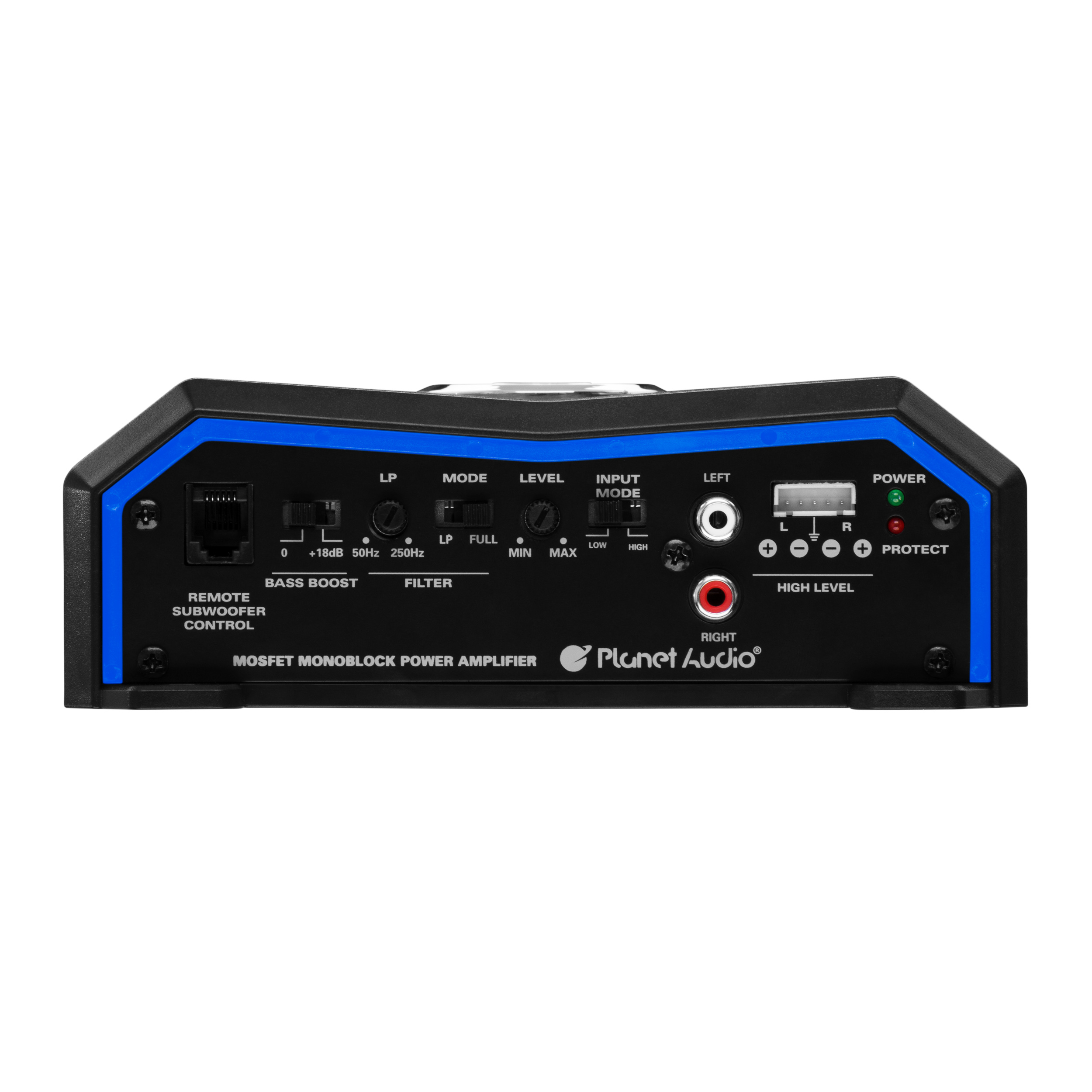 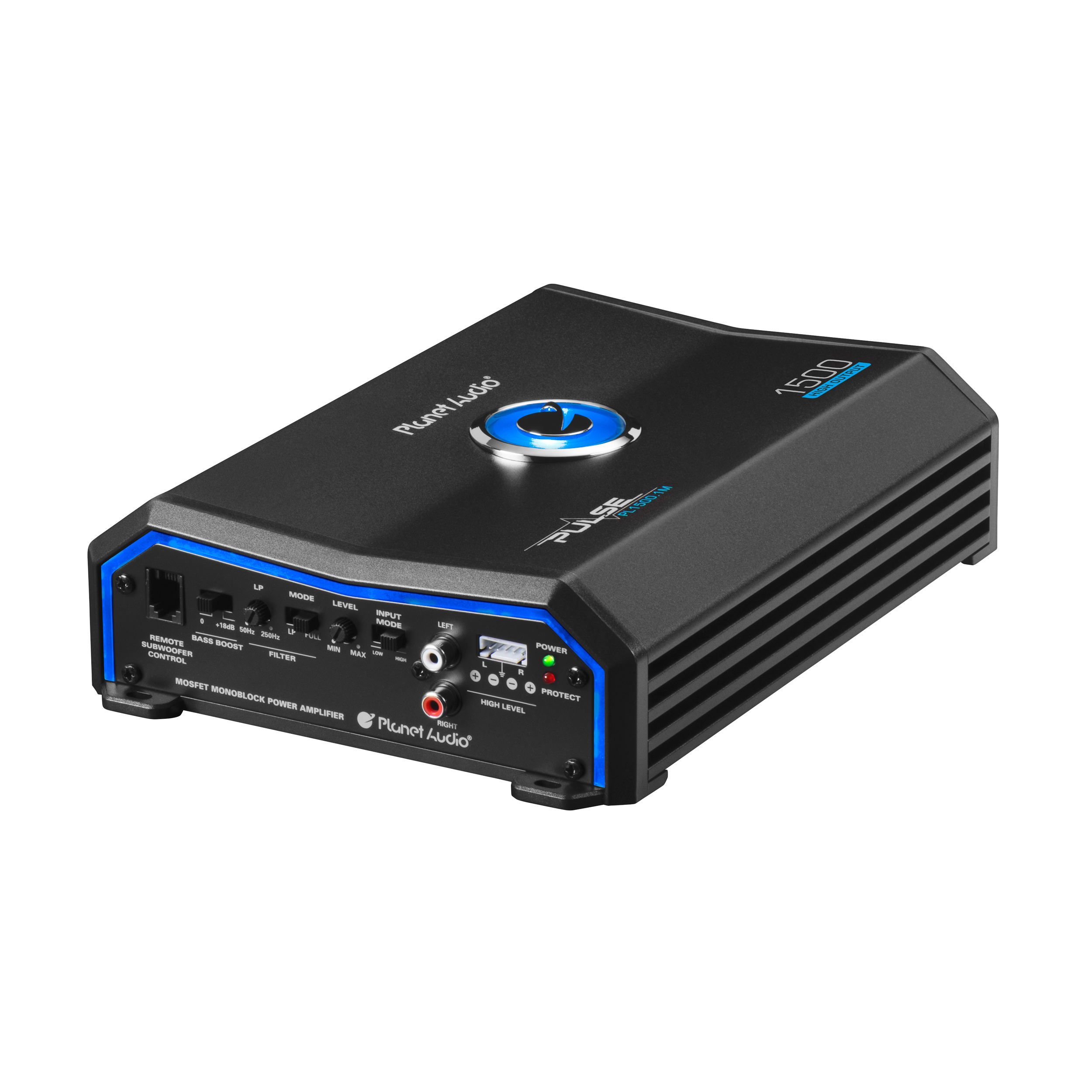 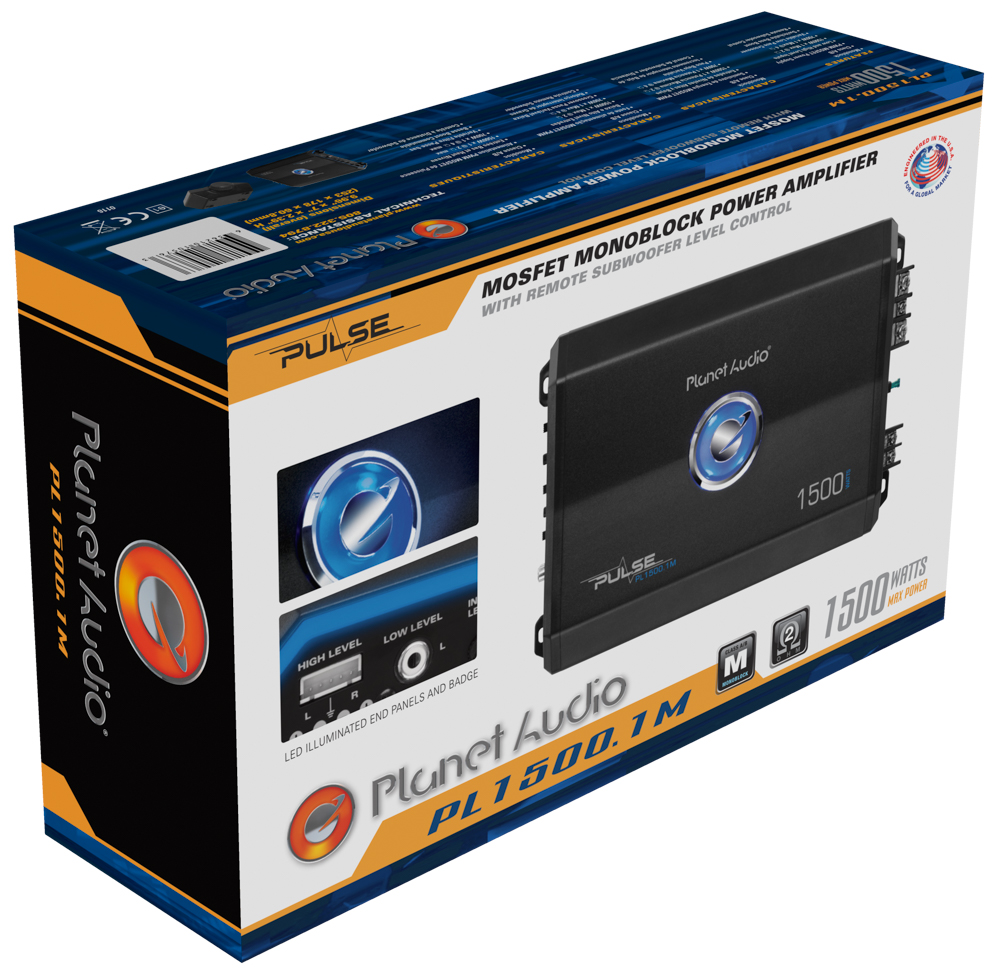 The lowest impedance accepted by this amplifier is 2 ohms. Amplifiers that are 2 ohms stable produce more power resulting in more volume. This amp can comfortably power speakers or subwoofers with all channel(s) being used at a load of 2 ohms.

Class A/B amplifiers have long been known for their ability to produce great quality sound while performing more efficiently than pure Class A amplifiers. We have developed a specific linear circuitry that further reduces distortion while increasing both sound quality and power output.

MOSFET stands for Metal Oxide Semiconductor Field-Effect Transistor. MOSFETs are used either as a switch or to amplify a signal. MOSFETs are superior to other FETs, because they require less current to operate, which makes them better suited for car audio.

If the amplifier gets too hot, the thermal protection circuit turns the amp off and allows the amp to cool down before turning it back on. If a speaker fails causing an electrical short, the protection circuit will automatically cut the output and remain in that state until the short is resolved. These safety features give you peace of mind knowing the amplifier is constantly monitoring conditions to protect itself.

The ability to boost or attenuate the sub level when an amp and subwoofer are connected to the subwoofer pre-amp output.

Switchable Input Sensitivity gives you the freedom to connect the amp to any standard source unit and have peace of mind it will be within range to properly match the output of the source unit allowing you to use the volume controls on your source unit the way it was designed.

Variable Gain Control lets you balance the amps output with the speakers or subs the amp is driving. To much gain will lead to distortion and to little will lead to clipping.

Variable low-pass filter gives you control over the frequencies that pass through to the subwoofer.

Good power has gotten a little bit once but for the money it was a good buy
Was this review helpful? 5 3
5.0 out of 5

Works great so far. Looks like a quality product, has everything I need on it. Can't beat the price either for that kind of amplifier. Seems like Planet Audio is a great brand for cheaper but fair-good quality amplifiers. I took a look at all of their new ones and they all seem to be good and rated well. I also like the fact that they come with a warranty as well as a manual that gives ACCURATE details of the amplifier. Unlike some other cheap brands I have purchased from before, which have sketchy numbers for the amplifier's performance.
Was this review helpful? 5 3
5.0 out of 5

I purchased with the mtx terminator 12's and a 4 gauge wiring kit. Sounds awesome. I couldn't be happier especially for the price.
Was this review helpful? 5 3
4.0 out of 5

Thankfully this is easy enough for the boys to help me install in ...

PLANET AUDIO PL1200.2 1200W 2 Channel 2 Ohm Stable Amplifier with Remote Subwoofer Control
We are now a family filled with teen drivers who apparently think every vehicle needs more sound.
Thankfully this is easy enough for the boys to help me install in the vehicles.
It does take a bit of time and patience.
If you lay things out with the wiring ahead of time it helped for us.

Is an ok basic amp. Woks fine enough for now since I really prefer it not to get crazy loud.
I agree with others be careful as it seems to run hot.
I just have to be sure everyone knows to not run it too high/loud when they are in the car.

Very impressed for the money.

This is a great amp so far. I have never owned any Planet Audio equipment prior to now, nor had I really heard of them per se. I bought the amp based upon the other reviews and for the features and appearance. I love the speaker wire inputs. In my case, my car stereo is way too complex to replace the factory system. My factory stereo already has a subwoofer, so I just tapped the subwoofer speaker wires and pulled a remote lead from the existing wiring for the remote. My battery is in my trunk so I just tapped the positive and negative lines, added a fuse protector and went from there. I know that the "max" power ratings are really just silly but this amp does have more clean power than my 20 year old amp that finally melted down. I have clearer sound, better and harder bass than I had before and my previous amp was about 300 watts rms x 2 into 4 ohms. I am quite frankly shocked that you can get an amp this good for less than a hundred bucks. A few short years ago, this would have been a 500 amplifier, if not more. I am running two 4 ohm 12 inch Soundstream subs in parallel off of the single mono output, so it should be right around 2 ohms. The amp is supposed to be one ohm stable but I have no need to do that with my current setup. I have hit the amp with every kind of music from rock to pop to trunk rattling bass and it has not shut down or overheated at all so far. I also really like the aesthetics of the amp, the blue light on the front and the blue wraparound led's on either side give it a very cool look in the trunk. Size wise, it is smaller than my previous amp but that could just be better packaging on the board. The finish on the amp is very good and all of the controls are nicely placed and fairly simple. I prefer that the controls stick out from the amp the way that this amp is designed as it makes it very easy to make small adjustments without reaching for a flathead screwdriver. My old amp had the controls sunken into the frame so you had to use a small screwdriver to turn them. This is not a deal breaker, just a personal preference. I would have preferred an amplifier with cinch down allen-type screws instead of the clamp-type screws this amp uses. With the cinch-down type, you can just run bare wire into a hole and tighten it down. With the clamp-type on this amp, you would normally have to add a clamp to the end of your power wire and/or other wires and then screw them down. Again, not a deal breaker, just a personal preference. The amp does run fairly hot after long play, but in my 30-years of experience, this is not a big deal. Just don't put it inside of a space that is sealed off from air as any car amplifier, regardless of type, needs space to breathe and cool off around it. Another thing, I have yet to hook up the remote volume for the amp. I know some people have said that their remote did not work, but I find if you get the settings right in the trunk, you don't hardly need it. I can give more or less bass through the factory bass control and it is adequate. I am happy to note that there are virtually zero turn on or turn off thumps, clicks, or pops that I have heard. Some amps will click or pop when you turn them off or no, but not this one. If you are looking for a good subwoofer amp and you don't want to spend several hundred dollars, Planet Audio is a great choice. I am very pleasantly surprised and even amazed that you can get an amp this good for such a small amount of money.
Was this review helpful? 5 3
4.0 out of 5

Better Than Some Amps that Cost Twice as Much

We are in the process of upgrading/replacing the head units/subwoofers/amplifiers/speakers in all four of our vehicles. This one went into one of my teenager's cars. Since it's an older model hiding the wires was easier. We've found installs are harder to do and take more time on newer cars. This car was a 2002 so it was easier. With that being said, you will want to buy an amp install kit to help do the job if you plan on installing this yourself. As for the quality, this honestly works better than some amps that I've used that cost twice as much. It really amplifies the bass well. The only thing is, and the reason this is getting 4 stars instead of five is because if you turn it up more than halfway it's going to get hot. If you're installing this keep that in mind and make sure there is plenty of airflow to the vents so it won't get too hot. You may even need to run a fan. Other than that I have absolutely no complaints about this amplifier.
Was this review helpful? 5 3
5.0 out of 5

Nice amp for being so affordable. It does get warm. Make sure it has a lot of open space around it. Also, keep and eye on your battery and alternator, especially if you have other components hooked up. This amp alone makes a nice improvement on any radio you already have, but adding some subs will obviously make even more of a difference.
Was this review helpful? 5 3
3.0 out of 5

So far so good. Within the world of car audio and what you can realistically expect for sound quality, this amp does a great job. Its a small form factor, making it easy to place in your car, and produces more than enough power for most reasonable projects. As long as your goal isn't to explode your heart with bass, you'll be more than satisfied with the power. Good value too.
Was this review helpful? 5 3
4.0 out of 5

Not bad for the price!

So, there isn't much to complain about with this amplifier. Planet Audio sent me a working, non-defect item that does its job. The amp came with all the wires and screws, so nothing was missing and there were no scratches or dents in the amp. I have even tested out the protection mode at my own risk and it did work. It was purely on accident though, I had put a few clothes on top of the amp and it overheated from not being able to let the heat sinks do their job. I let it cool down for 10 minutes and the amp made my speakers go boom boom.

Here's the con, the one and only: the bass adjuster knob does not adjust my bass. No surprise, I haven't seen one yet that does.
That's okay, I adjust it from my head unit and it works.

Overall, I would recommend buying this amp if you are wanting a quality amp right below a Rockford Fosgate amp, but not at the price of one. I would not suggest hooking more than two sub woofers up to this amp or you will cause overheating or amp/sub damage. I have one Alpine Dual Coil 12 inch sub hooked up and it's all I need.
Was this review helpful? 5 3
5.0 out of 5

great unit
Was this review helpful? 5 3